We have been involved in the development of a plugin for QGIS that should help lighten the overall effort needed to use INSPIRE data streams using Free and Open Source Software for GIS.

The GML data format has the ability to encode what is called “Complex Features“, defined by the OGC standard. It consists in a generic object-oriented model of GIS data, where each expert domain can define its own schema for particular types of data. It is based on the XML technology, and especially on its ability to be extensible via the use of XSD schemas. We then find for example GeoSciML for solid-earth geosciences, WaterML for groundwater data, or CityGML for city models.

The manipulation of such streams of data are now eased by the GML application schema toolbox plugin for QGIS.

It allows to open Complex Features datastreams in two modes:
– the native XML mode, where each feature is represented as one geometry layer with a special attribute to represent the corresponding XML subtree;
– a relational mode, where the XML stream is first converted to a relational model in a database (SQLite or PostgreSQL), thanks to a dedicated OGR driver, before being opened in QGIS

In addition to these generic capabilities, the plugin can be extended by what we called custom viewer widgets that allow to specialize the way data are visualised in QGIS for certain types. The plugin provides two examples of custom viewers, for WaterML timeseries and for GWML borehole logs. 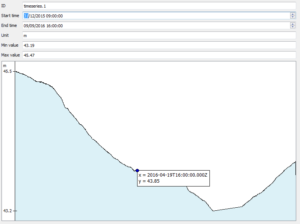 This new version 1.2 brings, in addition to a lot of bugfixes and small enhancements, a new user interface that has been reworked to ease the import of data streams.

The plugin is available on the main plugin repository for QGIS 3.x

These last enhancements and bugfixes have been funded by BRGM and The Association of Finnish Local and Regional Authorities (via Gispo) and developed by Oslandia and Spatialys.
If you are interested in helping improve the way Complex Features could be manipulated within QGIS by additional developments on the plugin, let us know !